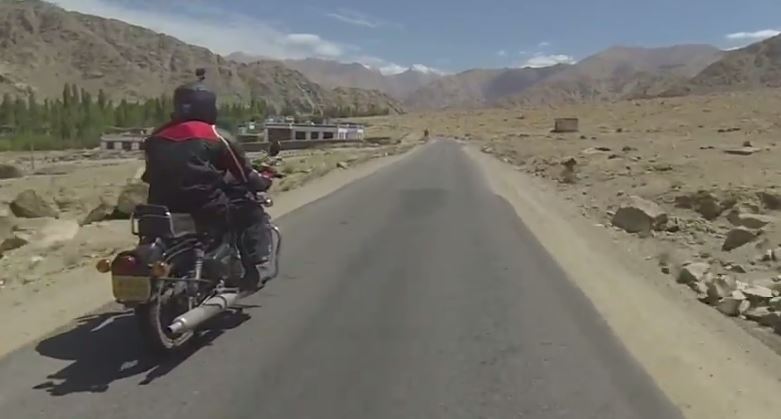 Our penultimate day’s ride took us to the much acclaimed, much awaited destination of Pangong Tso. The Blue Lake or the 3 Idiots Lake. This was a two day ride. A day’s ride there, overnight stay and then another day’s ride back. Kalpesh, due to prior commitments back in the US, had left the previous day heading back to USA. Sam had a flight early next day which meant that he could join us on the ride to Pangong Tso. He was missed. Him and his fear of all things water, crossings and wet! The PoshGoondas group was down to five riders; Vir, Fiona, me, Jatin and Nimish. Jatin and Nimish had decided to split a bike. Jatin ride to Pangong Tso, while Nimish rode the Backup Vehicle taking pictures. And on the return leg they swap; Jatin riding the Backup and Nimish the bike. So, in essence, 5 riders on 4 bikes!

The ride to Pangong Tso was like a summary of all the preceding road surfaces we had to navigate through over the past 10 days. Started off with city traffic riding, narrowing to quite single track tarmac, followed by climbs over smooth tarmac with intermittent water crossings, rock and rubble, reaching Chang La (Pass) at an elevation of 5,360 m (17,585 ft) where the ‘road’ – rather, a track, was lined with snow with an accompanying chill breeze. Then the descend over rough roads, back to smooth tarmac with intermittent rocky roads!

The video below shows the first patch of riding over the smooth tarmac. Undulating, wide smooth curves made for the throttle to open and a nice ride. After leaving Leh, this led to our first Chai stop and a breather. Jatin and I took were the ‘Tail’ group here. I wanted to enjoy the smooth tarmac and the gentle sweeping curves and decided to open up the Bullet and zip ahead. That was a fun stretch indeed.