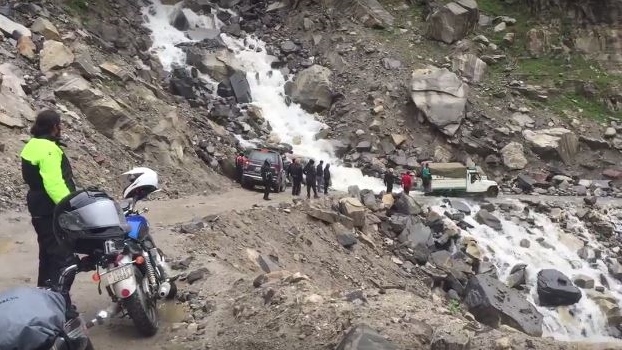 We had a number of Water Crossings on Day 6 riding from Kaza to Tandi.

A combination of Snow melt and rains created a heavy gushing flow of water from the peaks down to the Chenab River in the valley quite a fair bit below the roads. This particular water crossing was at the height of 3353m / 11000ft above Sea Level. The gushing water bore no heed to the roads it crashed and thundered over. The only thing that could be done to keep the roads from being unusable was to dump rocks across the road to create some level of traction for the tires. This, however, created a very rough crossing from Motorcycles, Cars and Trucks alike. The big rocks made it hard for the relatively thin motorcycle tires to gather any kind of momentum. The washed out road was traversed inch by inch, step by step.  The videos below show the nature of the ‘obstacle’ we had to deal with.

I was the 3rd rider to cross over. Vir on his Triumph Bonneville crossed first, followed by Vikram, bravely on his Impulse. Kalpesh followed me on his Bullet Desert Storm, then Jatin, Fiona, Sam and Biplov the last one. The first few feet saw my front tire get jammed between to big rocks. The feet had to go down to brace the bike with a throttle and push from another rider, Biplov,  who volunteered to help everyone cross the waters and then cross last. A push and pull from Biplov and some throttle created some momentum which got me out of the water and safely parked up. I then went back to the crossing to help the others to cross.

Nimish made the right decision not to attempt to cross the ‘river road’ with the bike. Instead Vir rode the bike across with Nimish walking behind. Such water crossings are not the situations to worry about ego or keeping up with the other riders. It is all about being sensible and safe. Good call, Nimish.