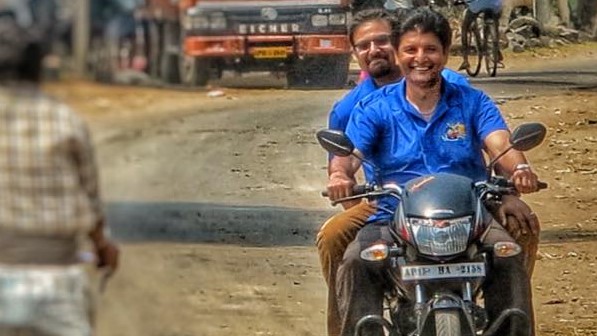 From whence the spirit of Adventure began.

While on the adventure in a Tuk-Tuk (3-wheeler engine driven Rickshaw) from Cochin to Shillong – all of 2700 miles from the South West Coast to the North East Mountains, we decided to stop for half a day in a small town in Telangana – Seethampet. This was to highlight the work of one of the charities we supported – The Frank Water Project. Out of the total 72 teams that took part, Team Chutney Chungas was the only one which made it there.And trust me, it was a Herculean task getting there – starting from navigating through rush hour Hyderabad traffic to tackling the blinding headlights of oncoming – sports car speed – trucks – not to mention the Lake Michigan size pot holes along the way.

The Frank Water Project were filming a documentary on their Water Purification Plant projects and requested us to feature as a Rickshaw Run stopping by to look at how the Charity works and its achievements.

This picture shows, me and Rama, riding in on the Town Sarpanch’s (akin to a Mayor) Motorcycle. It had been quite some time since I had ridden a Two wheeler. But once on the bike, throttle in hand, foot on gear, it was like second nature and that beaming ear to ear smile bears evidence to that.

And is that a nervously confident smile on Rama’s face? And is it also at this time that Rama was bitten by the Two Wheel Bug?
Perhaps this was that one initial small benign bite of the Two Wheeler bug. Leading to the PoshGoondas Bullet Ride to Ladakh.