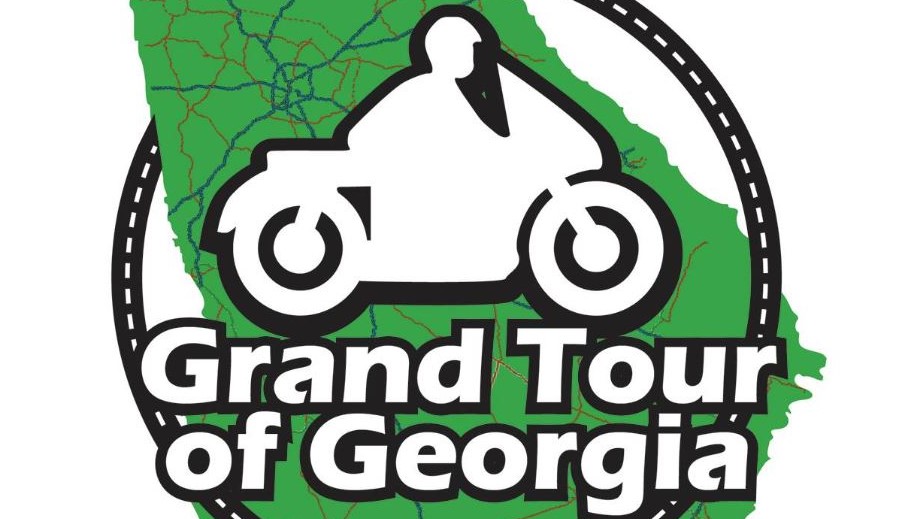 2022 started, in regards to riding, pretty slowly. Normally, by the time this first day of the GTGA rolls around, I would have put in multiple rides, starting with a ride on Jan 1. But this year, things just didn’t fall into place. On account of this my focus was on the GTGA (which runs from April through to November). With much anticipation, planning and the chatter on the GTGA Facebook group, the first ‘official’ day of the GTGA 2022 finally came around.

March 26, 2022 – The RTE (Ride To Eat)
This is an informal ‘meet and greet’ ride to a restaurant for lunch. Registered riders get to use this day to get the riding legs back, put in some miles, meet other riders, talk about each other’s bikes. And enjoy a nice BBQ lunch at a popular restaurant. This year it was the Three L’il Pigs in Pine Mountain, GA. South of Atlanta. The added bonus of riding on this day is that after lunch, riders get to grab any of the year’s locations in advance of the Official Start date of April 1, 2022, thus getting a bit of a head start and doubling up on the time taken to ride to the restaurant. On average, most riders grab 4 or 5 locations on this first day, since it’s about a long half day available to grab the locations.

I had initially planned to ride straight down to the location, for the 11am meet and greet time. This would be an hour forty five minute ride right through Atlanta. But then one of the regular GTGA riders and Long Distance Rider, Doni shared a plan to meet up with few other riders and ride together from the meet up point in Newnan, GA and ride as group via the back roads to the restaurant. I decided to join Doni and his crew. At the meet up point I met up with another rider, Scott, who also decided to join the group ride. Both he and I were on the Adventure Bikes – me on my Yamaha SuperTenere and Scott on a BMW. Doni and his crew were all the big Cruiser bikes – the Harleys and the Hondas! Doni didn’t mind. Using his quote ‘It’s the same wind’. The group ride was well organized and timed. Doni runs a good group ride – Captaining a tight ship. And the ride via the ‘rural’ back roads, through some old historic towns was pleasant, even in the high 40s temp with the added chill factor while riding.

It’s always fun meeting up with the riders. Talking about their experiences, their bikes and any modifications, and their upcoming plans. Point to note is that most, if not all, of the riders are Long Distance Riders. For them a 500-600 mile day is a normal ride. I am still not in their league and doubt I’ll get there anytime soon. This makes their stories all the more interesting. With lunch and the chit chats done, time to ride out to grab some locations. As I went  up to the bike, Scott was also just heading out. Quick chat and I decided to join him and we ride together to grab the locations. A change from my original plan, but a ride’s a ride, and it would be good to ride with Scott. He had planned on heading south and swing up North and then head home. So off we went!

Dowdell’s Knob:
This stop was pretty close to Three L’il Pigs. About a 15 to 20 min ride in the Pine Mountain area. A nice little stretch of a elevation and some gentle twists and turns. The view from this location is just splendid. Any wonder that it took to the liking of FD Roosevelt, whose statue sits under the flag overlooking Georgia.
More info:  Franklin D. Roosevelt Historical Marker / Dowdell’s Knob

Green Grove Schoolhouse
The next top was about an hour and a half ride down south heading into the flatlands of Middle GA. We stopped for a quick relief and fill up at a Gas Station close to Dowdell’s Knob. The ride thereafter was decent. Along the back roads and a section of the Highway. That was a a bit boring. We had a quick fuel-up pit stop between this stop and the next. Riding the back-roads, gas stations are few and miles of open farmlands in between.
More info: Green Grove Schoolhouse Historical Marker 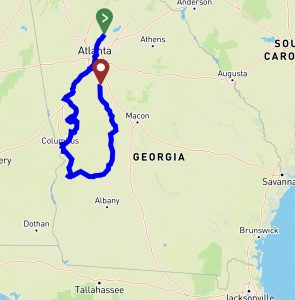 Lanier/Miona Springs
After the Schoolhouse, we continued with another hour and a half of riding the rural back-roads. All very flat along farming fields and pastures. During this section we had to ride through a big wall of high gusty winds blowing right across us. At times, the bikes were running, but with a lean towards the direction of where the wind was blowing from. Mainly from our left gusting to the right. This location is on the roadside and easy to ride past initially and then U-Turn back. I did just that! While Scott, who was following me, was able to stop conveniently close to the Historic Marker.
More info: Lanier/Miona Springs Historical Marker

This now left the last planned stop for the day. Which was a long ride North back to just south of Atlanta.

Hampton Speed Lane
This was an all back-roads ride of around hour and a half. A good ride – even though flatlands – with some exciting ‘passing’ of slower moving vehicles 🙂 And add a slight delay on account of road repair crew closing off one lane. This needed vehicles on either side of the road block having to wait for the ‘Escort’ truck leading the procession from one of the block to another.
This particular location was along a busy city road and not quickly visible from the stree. We had to double back, park up where the GPS announced ‘You have reached your destination!’. A short walk and there it was.
More Info:  Richard Petty Historical Marker

With this location done, time to head home. Scott announced that he’d shoot off and ‘zoom’ through traffic. I bid him safe journey and followed, at an easy pace, behind him before he disappeared. But then traffic everywhere had other ideas. Slowed Scott to a stop while allowing me to catch up with him. Every which way around where we were showed solid red lines of traffic. What should have been an hour and 15 min ride back home ended up to be just over 2 hours. Just as the Sun set.

Here’s a short video compilation of photos and videos: