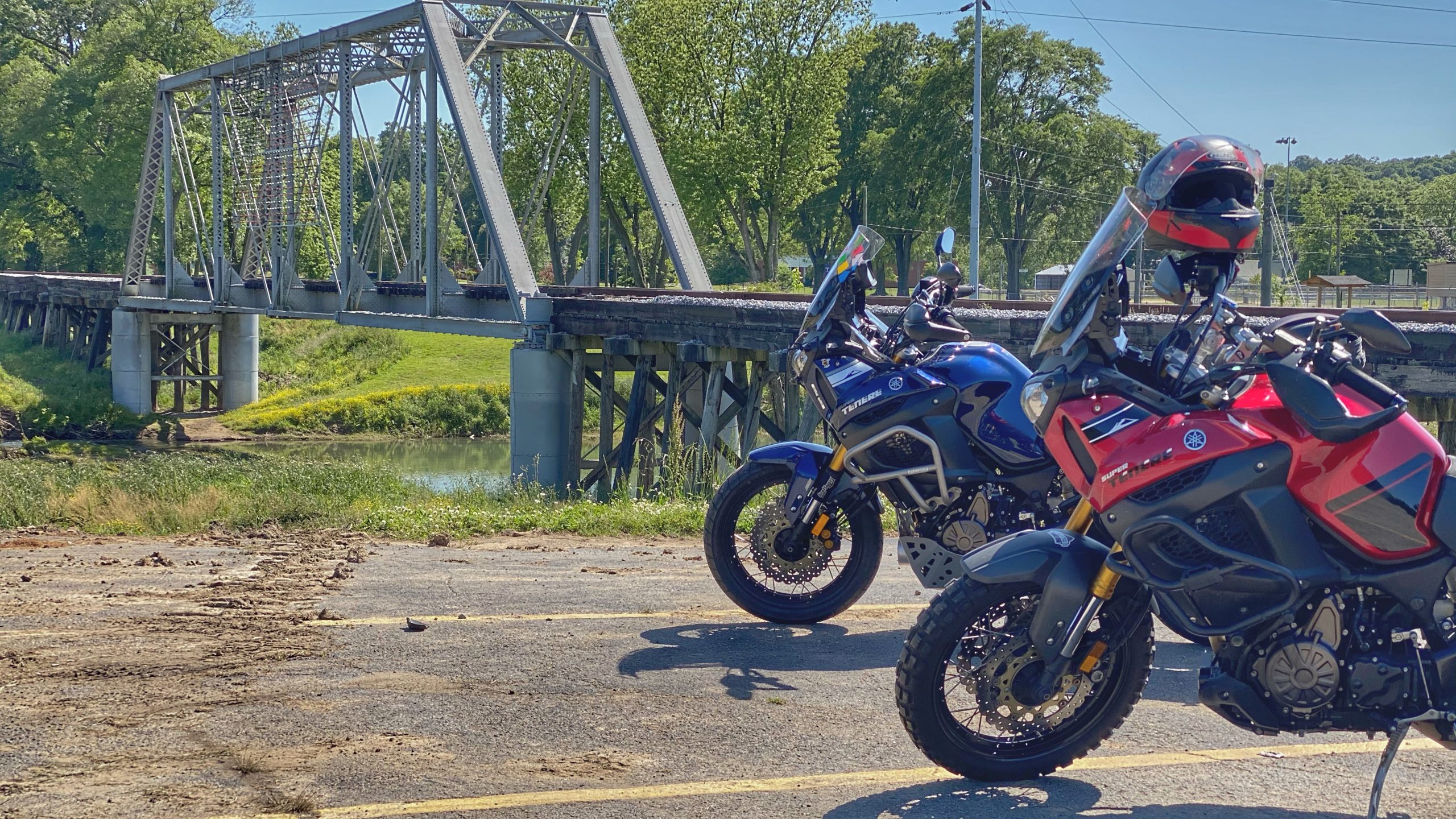 Initially planned for Saturday afternoon, but life got in the way and the GTGA ride was pushed out to a much warmer Sunday afternoon. Turned out to be a Mother’s Day ride.

The same posse of three riders riding today. We expected a fourth to join us. He rides a street bike – Honda CTX. But the late afternoon start did not suit. So the three motorcycles – 2 Yamaha SuperTeneres and a KTM set out after fueling up at the local QT Gas Station which is also one of the meeting points for our ‘let’s just go riding’ rides.

I’m in Alpharetta, GA and riding west across the I-75 doesn’t happen regularly or with that much eagerness. Some great riding though.

A round trip of 233 miles. Going west via a Southern route on Hwy140, across the 75 and up to the 1st stop – Euharlee. Then further North, via a Waffle House lunch in Rome, to Trion and the Chattooga River Bridge (a railroad bridge).

I chose the route to go through Red Mountain State Park on the western edges of Lake Allatoona. Multiple side roads and camping sites were blocked off and the main parking lots had lines of cars waiting to get in. This was fairly surprising. To see so many people out and about, while the urban areas seemed barren and desolate.

Once we crossed over the I-75, we left the the urban roads and quickly got into the rural areas. The first stop was in Euharlee. The Euharlee Covered Bridge. Nice bridge dating back to 1886 and still standing. Only pedestrians allowed. This would have been a nice stop during ‘normal’ times. A quaint little Tea shop, a Country store and even a Barbecue food place. Might be worth an RTE on afternoon after some semblance of normalcy prevails.

Next stop was planned to be some place to grab a bite in Rome, GA. We found a Waffle House open and under strict distancing rules. Clean and sanitized. Hot food, decent prices, just right for that quick bite and back on the road.

Then on through Rome and heading to Trion via Summerville. We followed SR27 – a nice short winding run up and then veered off right into Butler Dairy Road, to enjoy a country road stretch and bypass the town of Summerville.

We reached Trion fairly quickly. The Chattooga Railroad Bridge. A nice small town which rose out of a Cotton Mill from way back when. Trion comes from ‘three brothers’, if the Security Guard there is to be believed. He walked about a 1/4 mile to meet us and ask what we were doing. The spot where we had stopped was on the Mill’s property and he came to tell us that we were not supposed to trespass. I grabbed the GTGA Passport and explained to him what we were doing. He then patiently answered our questions – like a historian – regarding the mill and the rail service. The bridge at this location is actually a railway bridge over the Chattooga River. Thanked him for his help and the information he shared and we fired up our bikes to head out.

The two bridges done and the ride home. North up to LaFayette, then East on SR136 right. I first rode on this road for a GTGA ride many years ago (rides to Chickamauga and Rome). Always enjoy the SR136. A quick break at Talking Rock (another GTGA location from previous years), up to Burnt Mountain and then the lower North Georgia back roads to home.

Is it time for another ride yet?