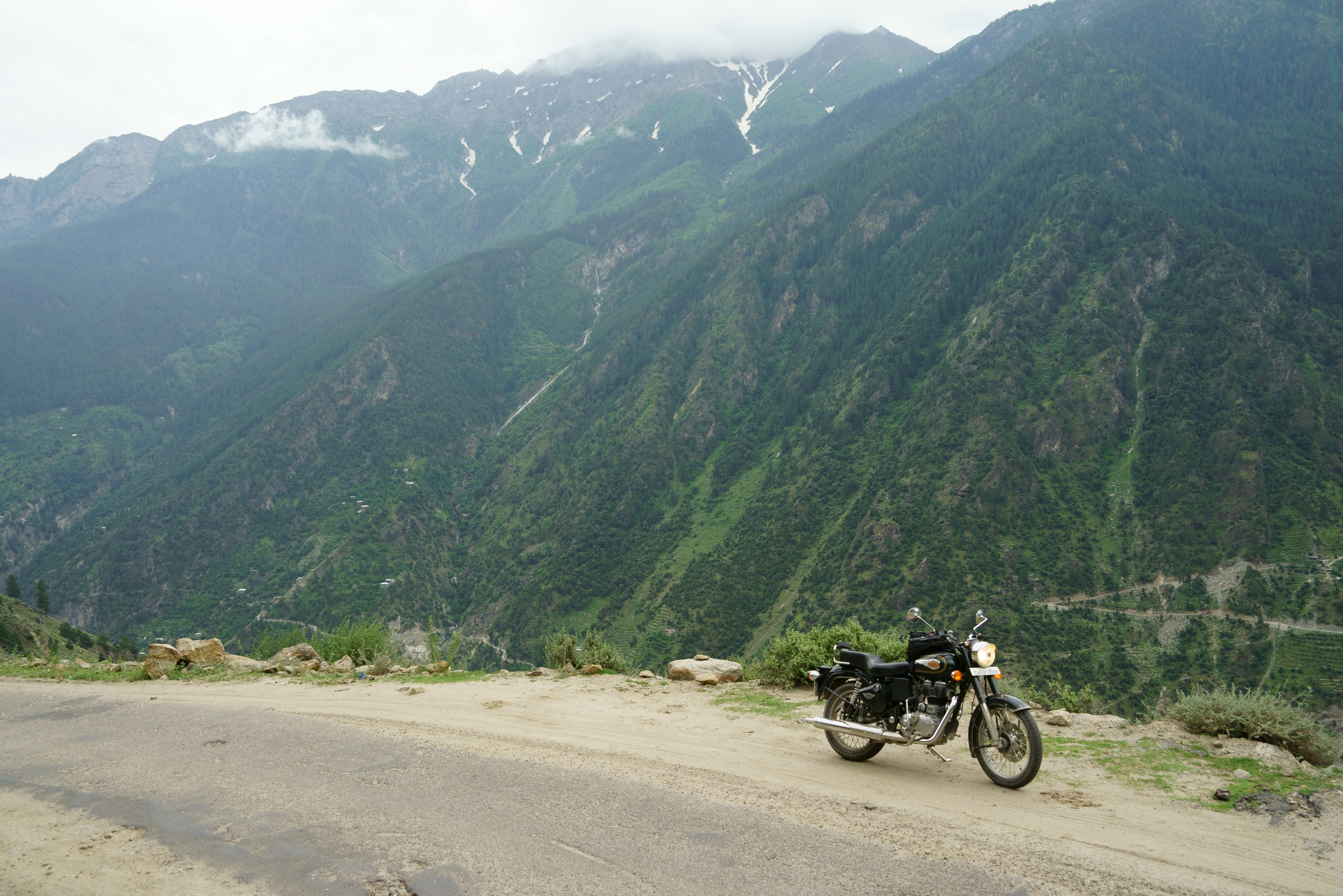 The first day was like a street ride commute. Vir had forewarned us that after about a half a day’s ride, we would see dirt roads with possible rain too. Excitement and anticipation.

But first the need to update ‘back home’ with the hellos and goodbyes. The problem was, at this ‘network remote’ location, WiFi was confined to one office room enough to hold 2 people max! With 5 people from our group and more from the other group of riders who were also staying at this hotel, we may have broken the internet! That done, we fed ourselves a nice breakfast, while chatting with a group of riders from Pune, who were travelling more or less our route but looping back via Kashmir.

We headed out, in convoy, quite organized (and boring?) with a first stop in town for fuel. Petrol Pumps have one or two pumps. This makes filling up 7 bikes and back up truck a long stop! That done, we were on our way. Day 2 was on!

The first half of the day up to around lunch time was easy going. Good to decent tarmac (asphalt) roads. Although National Highway, these are actually single roads. But any inconvenience caused was forgotten by the landscape we rode through. Fresh crisp air, green hills and mountains with the road weaving through trying to be careful not to disturb the balance of nature! We stopped at various scenic ‘Kodak moment’ spots, but soon realized that stopping every 2 minutes would really not get us anywhere towards our next overnight stop in Kalpa! We soon absorbed Nature through our own eyes and the mind’s camera captured it.

Lunch stop was at a road side ‘restaurant’. Simple limited menu. Home cooked and fresh off the stove. Roti, Vegetables, Rice and Daal (Lentil Curry). A husband and wife team. Husband was the Chef, while the wife handled the orders and managed a small store on one side of the restaurant. Lunch was followed by the customary tumbler of Chai. Fed and refreshed we were soon on our way.

Vir was right. But then he would be. He knows these roads like the back of his hand! I’m sure he’s so familiar with the potholes that he must have named each one of them! The tarmac soon gave way to dirt and with recent rains, many sections of the dirt / gravel roads were muddy and slushy. Made for some great riding.

Meandering through the winding twisting tracks. The gushing and in many places, roaring, Sutlej River kept us company, barely a stone’s throw away. Sometimes on our left, sometimes on our right, as we criss-crossed over bridges. But always there. At one point, where a Dam was being built on the Sutlej, we had to take a detour – the long way up and around a mountain. That was a fun section. Narrow tracks, quaint little towns, school children cheering and trying to race with you and looking for that ‘high five’. The pleasures from small simple things. Content.

Over the mountain and back down again to welcome chai stop. By this time the clouds had gathered overhead but still warm and little humid. The riding also became cooler with the sun hid and the air blowing in your face being cooler! By the time we reached the outskirts of Kalpa, our destination for the day, we were ready to stop and relax.