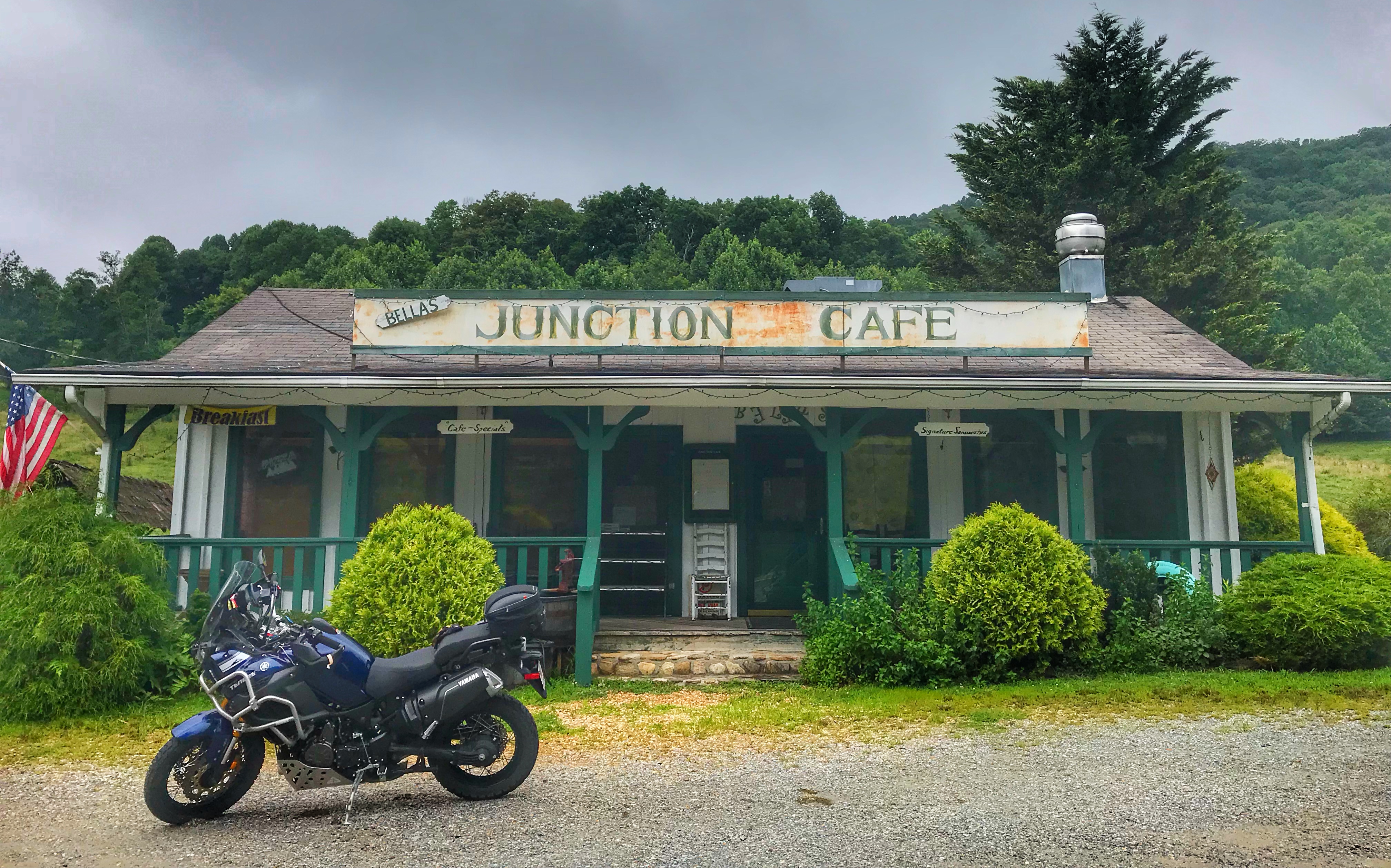 There were no plans to ride on Saturday. There were no ‘let’s ride’ call from the riding group I run with. Come Saturday, a lazy breakfast and possible FIFA World Cup Football (Soccer!) viewing on the cards.

One of the location on this year’s Grand Tour of Georgia (GTGA) was in the western section of the Northern Georgia mountains. Up in the Nantahala Forest area. From where I’m located, as compared to my normal riding playground of the Chattahoochee Forest, Nantahala is a bit longer of a ride and this makes it a long day ride. This location had been on my mind for quite a few weekends. Location was such that it would have to be long ride out just for this one location. I had ‘captured’ the nearer, easier locations already. With that, I decided. ‘Let’s Ride’. Checking the weather, there was rain expected. Rain or shine, mon ami, Rain or Shine! Automatic choice of Goretex Gear. Warm and long day was now on the cards!

1st stop was Clayton, GA. That’s where the location was. About half an hour rides away from Clayton, GA the skies opened up and the rain pelted down. All the gear worked as it should. I was dry; I was comfortable and the wheels kept eating up the miles.  By the time I got to Clayton, it was time to grab a bit and get out out of the rain which was now a light drizzle. Huddle House stop again. Quick lunch planned turned out to be a ‘take my time’ lunch. I could have saved some time here instead of being in a ‘relax’ mode.

Moving again, captured the location in Clayton and headed to Highlands as the Northern part of the loop via Sky Valley – the highest city in Georgia. Few miles past Sky Valley, cross over from Georgia to North Carolina across the state line and head to Highlands, NC. A quaint little town nestled Nantahala Mountains. A quick fuel stop. And head South to complete the loop back to Clayton via Warwoman Road. The ride took me from Clayton’s elevation of 1900ft above sea level to Highlands, NC at 4118ft above sea level in 23 miles, with Sky Valley (the highest city in Georgia) at 3297ft above sea level. And then back down to Clayton in 27 miles of just fun twisties with a rock and a roll. A marked difference in temperature. So much cooler in Highlands, NC.

The loop; Clayton – Sky Valley – Highlands, NC – Pine Mountain – Warwoman Road – Clayton is a round trip of 50miles and about hour and half ride. More if you stop for the multiple Photo ops!

For those motorcycle riders or car drivers who like mountain road trips with a decent twisties, this is a great loop to do. A weekend away could easily be planned using Highlands, NC as base camp.

The Clayton to Highlands section seemed to have elevation over long curve stretches with a few tight bends to keep you honest and aware. Most of the way lined by thick lush trees creating a cooling tunnel over the road. The way South, especially Warwoman Road had a lot more bends and twists. Almost a rhythmic left and ride undulating dance on the bike. The recent rain must have been heavy. There were a lot of tree debris strewn across the road. Making for slow riding especially around the bends. And surprisingly (the rain would have played a big hand in that) on the way down, I did not see any other vehicle on the road. As if I was the only one out in Pine Mountain! All in all another exhilarating ride.

By the time I was down to Clayton again, I was already behind my intended schedule. If there was more time, I had planned to ride east to Suches and then drop down South. With the time being eaten up by Huddle House and Photo Op stops, it was a fast slab ride down the 985 past Gainesville.

Thanks to the team at Grand Tour of Georgia for some awesome ‘riding locations’ this year.

.🇺🇸 What did the Pink Gin say to the Dirty M

🇺🇸 The new looking after the old or the old

. I was finally able to try out the @snapmounts ad

. Here's a short 'trailer' video of a ride I did r