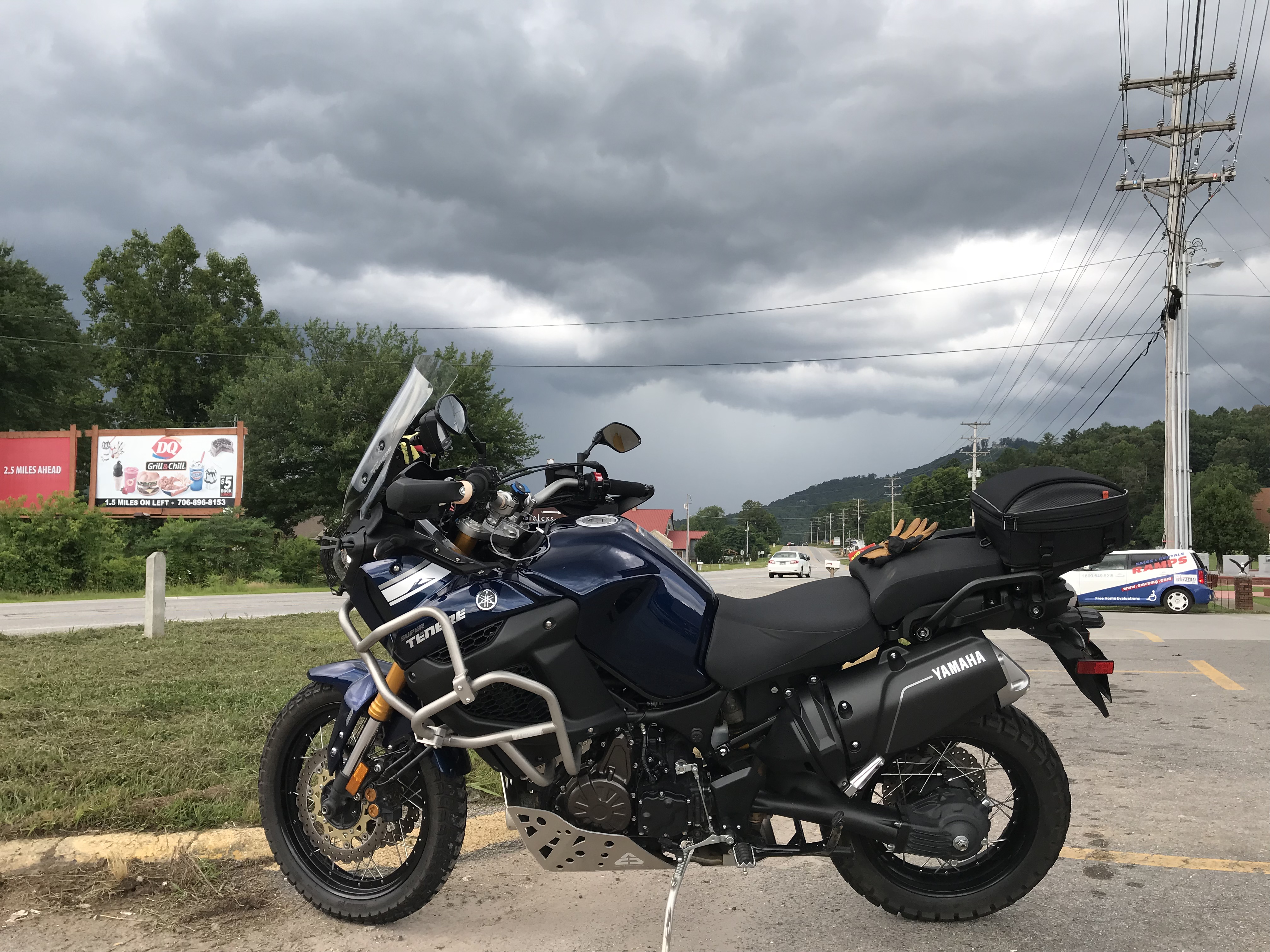 Not much of Honey-Dos to do. Thought I’d make use of 91°F day and head for an Afternoon ride up the mountains. A long ride, I thought. Run the Gauntlet, I thought.

Great ride up to Helen and then on to Hiawassee. A fuel stop. And then the looming dark clouds up ahead open up with a few cracks of lightning. Time to stop again and get shelter. Come to think of it, this is the second time

The rains caught me just before I could hit a Huddle House and huddle up there to wait the rain out.

Coffee and some fries. While I was reflecting on where I was, how I got there, lucky to have been in a town etc.. a couple on the next table to me caught my attention and took my thoughts on another path. They were later joined by an elderly lady – barely able to walk, frail and yet still wanting to manage as much as she could by herself. But that’s another story later.

The rain let up.  Very light drizzle and looking southward, the skies were lighting up and clear. Time to head out.

The plan was to continue with The Gauntlet. But between Hiawassee and Blairsville – a traffic jam – two lanes backed up. I changed GPS to the most direct and quickest route to Suches, which led to cutting off the loop from Blairsville to Suches and instead shooting straight south, through some nice wooded – albeit wet – roads and then ultimately meeting SR180 – Wolf Pen Gap Road to Suches.

Quick stop at Wolf Pen Gap Store and then across the road at Two Wheels of Suches. The restaurant was closed but there were a few bikes and some riders outside. There was a group of three who had just arrived at Two after a ride from Connecticut via West Virginia and staying at Two for a week to enjoy the Suches twisties.

(I have not stopped as often as I used at Wolf Pen Gap Store. This was until about a year ago a ‘must stop’ for most motorcycle riders. Very much like Two Wheels of Suches. And when I stopped there, I was a little surprised as to how empty the (outside) looked. Almost lifeless. This place used to be abuzz with riders taking a break, filling up, and then the chats and stories as acquaintances are made with the common thread of the motorcycle. Very disappointed to read that since ownership changed, the new owners have practically made this ‘must stop’ to ‘avoid at all costs’. I am sure the owner just doesn’t realize the damage he is doing to his own business and the loss of respect within the community.)

The surprising thing about all the three BMW GS was all of them running on street tires. GS bikes smack bang in the middle of great offroad tracks as well as asphalted twisties and restricted by the ‘wrong’ tires. But then, and very understandably so, to each their own. There is no ‘better’ ride or style or bike. The bike that you own, that you ride; the roads or tracks that you ride on; if these give you that cheesy smile inside your helmet; that there is the ‘better’ ride.

. The Sun provides for visual warmth on a cold cri

. If a train doesn't stop at your station, then it

. Gare do Oriente One of Lisbon’s Train stations