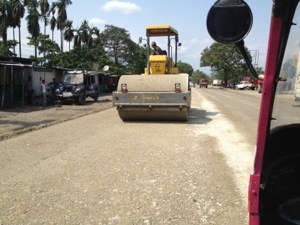 Based on local intel on the road to Guwahati, we expected a smooth ride towards Guwahati. I was even contemplating trying to push for Guwahati for the night. Little did we know what was in store for us.

Endless patches of ‘under construction’ roads. Rock bed of a surface, throwing up continuous clouds of dust. The ‘good roads’ were mere figments of some people’s warped imaginations!

It was getting depressingly slow and extremely frustrating. Amazing how expectations work!

A brief patch of expressway was like a mirage. Here one minute, gone the next!

As noted earlier the weather closed in and the driving turned into stressed night drive. We had some 55kms to cover to reach a decent hotel in Boigangaon, Assam. I decided that we will push through. But then rain came out to play. This added some concern of poor vibility. Fortunately the bulk of the rain storm came down well ahead of us and we only went through some light rain. However, the mix of water on the pothole ridden roads added another level of inconvenience.

I used the convoy if trucks to my advantage. Most of these trucks are full loads and travel at around 50/55kms per hour. Matching the speed we push CoCo to. I picked a truck and slotted in behind it. It practically cleared a path for us. That made the night drive substantially safer and easier.

We then came across the Pink Team – struggling in the rain. They actually had a team member use an LED flash light to light up the way ahead. Doubt that it was doing any good at all. To each his own! I passed them and asked them to follow me and I became that shielding truck for them. I then looked for another by truck to latch on to. And we convoyed thus into Boigangaon and into the compound of the ‘grand’ Hotel Kanishka. Have to be honest, I was strongly contemplating using the Truck Shield to guide us all the way into Guwahati. But, with the 20/20 vision of hindsight, it was better to have rested up for the final push to Shillong tomorrow.