Unless the ride days are planned and set in stone, I tend to let the weekend mornings slide. I should really Plan the Ride and Ride the Plan, to avoid reducing the riding time available and thus making sure I can put in some longer triple digit rides. The weather forecast called for a cool windy ride. The FJR1300AE was fuelled up and ready to take flight. The plan was to head over to the Burnt Mountain lookout point. One of the stops when I rode with the WeekendRiderz Group on Sept 28, 2015. There would be one stop along the way. At Stancils Store. One of my favorite locations to take pictures of the bike.

I set out around 1:30pm, expecting to be back by around 3.30pm. However, I didn’t factor in the photoshoot time  as well as some GoPro set up time. I backed up the bike into the garage at 4:30pm after the end of a good, cool, crisp ride.

The ride to Stancils Store was good and quick. A few riders, probably on their way home from their early morning rides, and their customary ‘waves’ and very little traffic. That said, the single lane 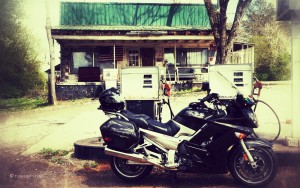 back country roads can create a ‘jam’ with just one car or truck driving at a snail’s pace. Fortunately, I didn’t have to endure that. Smooth riding all the way.
Stancils Store is an old gas station convenience store dating back to 1950s. It is now derelict. The gas pumps aren’t that old; making me think that store was a running business up to about a few years ago. It shows age. Beaten by the passing seasons and years. A star spangled banner proudly (fairly recently, I imagine) pinned to the wall. There is quite the interesting history behind this store and the original store across the street – now well over 100yrs old and still standing. More on this on a later post. I like the way this location provides a nice ‘dated’ backdrop to the modern bike like the FJR1300. The nippy wind was picking up. The Sun fought valiantly against the cold wind. I think the wind was winning. Took some quick shots and on with the gloves, zip up jacket, face shield down point towards Burn Mountain Lookout Point.

A few miles into the ride, I reset the TomTomRider GPS to take a ‘winding route’. That made for some interesting riding. One of the roads it suggested I ride on was a forest trail which was closed! TomTom didn’t really like that I ignored it’s ‘guidance’. I don’t think TomTom knows that the FJR1300 isn’t the best bike to tackle trails or loose gravel roads. The FJR1300 does create nice adventures; but an Adventure (ADV) bike it is not. As if trying to convince me to take a path off the beaten road, TomTom guided me to Goosen Church Road to get to the US136 towards Burnt Mountain. This road started with a nice new black top which turned into a narrower old beaten up country road and then to a loose gravel hilly road. I had to ride in the low gears and at snail’s pace trying to maintain a straight driving line. I had to make sure that the front wheel didn’t turn to abruptly and give way, laying the bike down. This is very easy to do on such roads. Quite an interesting few miles. I should now be ready to ride across Alaska now, I guess!

Back on the 136. This was a nice little stretch of some twists and turns over inclines, leading up to the Burnt Mountain Lookout Point. This is a nice little lay by. On a good warm day, this little patch would be packed with Cars and bikes. A good way point for a break to enjoy the vista from the approx 2200ft elevation. The skies were cloudy and the climb up to the point dropped the temperature down to 41°F (5°C). With the light wind blowing across, it wasn’t the best time to be hanging about there. Some pictures were taken with the camera and the iPhone. The GoPro4 which was lying dormant in the pannier, was brought out and set up on the stem mount using a Ram Mount arm clamp. Angles adjusted and set in Video mode. All that was left was pressing the start and stop buttons. The video below has clips shot on the way back from the lookout pass to Home base via Grand View Road.

Just under a 90mile ride. Not impressed with the distance, without doubt. But still a good ride.

Till the next ride;
Rubber side down and Ride Safe!

Some images [click on the images to view full size] and the video from the ride: